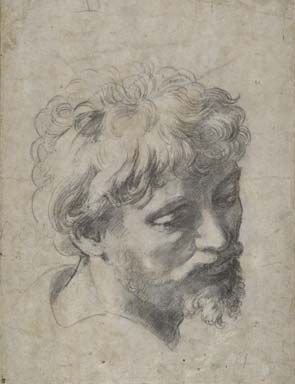 Following on from the rather sensational record sale for any artwork, Edvard Munch’s 1895 “The Scream” that sold in a Sotheby’s Sale in New York earlier this year for nearly $120 million that had tremendous publicity with a stunning short film that certainly racked up the tension in the lead up to the sale, now a historic moment for Renaissance art has taken place.

Several months later, again with wide publicity including another beautiful film (viral on twitter) seduced us with the up and coming sale of Raphael’s stunning black chalk drawing Head of a Young Apostle, dated around 1519-20.

A surprise was in store for the art world that just goes to show that the Old masters are still highly prized, if not the ultimate prize.

Sotheby’s London achieved a staggering result on 5th December in its Evening Sale of Old Master & British Paintings as the Raphael drawing fetched £29.7 million which was nearly three times its estimate that was between £10-15 million.

This is the highest amount ever paid for this artist at auction or for any work on paper sold at auction and it beat Christie’s sale of Raphael’s Head of Muse, also a chalk drawing, dated around 1511 that sold for £29.2 million.

This work is a preparatory drawing for a figure in Raphael’s Transfiguration, one of the greatest Renaissance artworks, that hangs in the Vatican Museum in Rome.

As reported in Artdaily.org, Senior Director in the Department of Old Master Drawings at Sotheby’s Cristiana Romalli said:

“This very moving study is a paramount example of Raphael’s draughtsmanship – and shows exactly why he is revered as very possibly the greatest master of drawing who has ever lived. The sheer beauty of this work is utterly breath-taking – and the way in which it allows us to join Raphael as he created his last great masterpiece is hugely exciting.”

But surely not the greatest master draughtsman? What about Leonardo da Vinci? Or Michelangelo?

It is reported by the BBC that the worldwide head of Old Master Drawings at Sotheby’s, Gregory Rubinstein, said “If you are lucky, at some point in your career a work like this comes along.”

The drawing belonged to the Duke of Devonshire who placed other important artworks in the sale in order to raise funds for the upkeep of Chatsworth House in Derbyshire.

The Raphael leaves the Devonshire Collection having been at Chatsworth House for more than 300 years.

It has a new home now and although we presently do not know who the new owner is, no doubt he or she will make their important announcement at some stage soon, as the glory of owning such a prize for a collector is often as important as the prize itself.

Watch this space for other dramatic and exciting auction sales.